A couple of general requirements to be aware of:

The best way to install Subversion and JavaHL on Linux is to use the package from your distro, For example, on Debian based distros like Ubuntu or Mint you would just do this:

And on RPM based distros like Fedora or CentOS you would do:

The main problem you might run into is that some distros include an older version of the SVN client then you desire. The current Subclipse version requires SVN 1.9.x, so if your distro includes 1.7 or 1.8 you need to get a newer version.

WANdisco provides up to date package for many Linux distributions. These packages are designed to replace/upgrade the ones that come with your distribution. https://www.wandisco.com/subversion/download

The CollabNet package has a different RPM name and installs into a private folder, so it does not replace the one from your distribution. Instead, you edit your PATH to use the version installed. 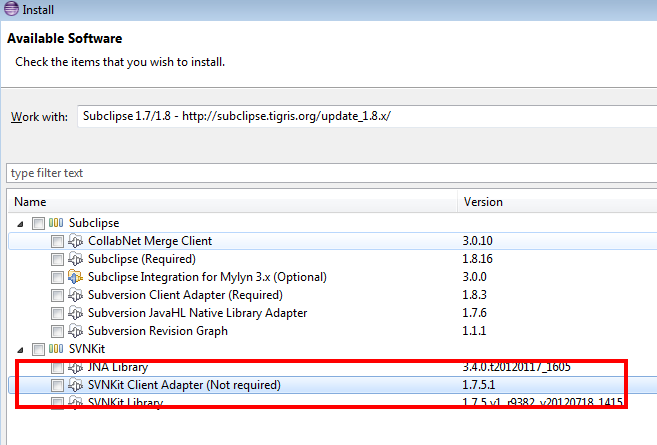 This varies based on the version of your distribution and the package. Some of them install the JavaHL library to a location where the JVM automatically finds it, and others do not. The JVM searches for JNI libraries based on the value of java.library.path. If you install the package and Eclipse is still giving you an error message, you can configure Eclipse so that it finds the library.

To do this, find the folder where the eclipse executable is installed. There should be a file named eclipse.ini. Open this file in a text editor and look for a line that says -vmargs On the lines that follow will be arguments to pass to the JVM on startup. On the line immediately after, add the following:

The path to the library, needs to the folder where libsvnjavahl is installed by your package. For example, on Ubuntu you would need:

And if you use the CollabNet RPM then you need: